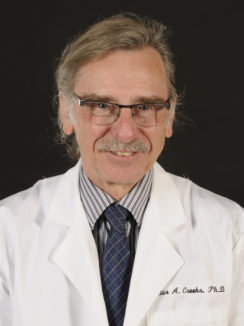 Dr. Crooks is internationally recognized for his research and work in anticancer drug discovery, delivery, and development. He leads a research team to discover and develop new cancer treatment drugs with an emphasis on lymphoma and leukemia; to develop radiation agents to improve patient outcomes after radiation therapy; and to develop new pain medication to treat acute and chronic pain. He also has an active program in drug abuse which focuses on the development of new treatments for methamphetamine, nicotine and alcohol addictions. Dr. Crooks has graduated 30 PhD students and 9 MS students, and trained over 60 postdoctoral fellows and visiting scientists. Dr. Crooks has also established or co-founded six drug discovery companies and his drug discovery patents and patent applications total more than 270. At present, several of his laboratory’s drugs are in various phases of clinical development. In September of 2013 the anti-cancer topical gel Valchlor, developed in Dr. Crook’s laboratories, was approved by the FDA for treatment of early-stage cutaneous T-cell lymphoma.

In 2011, Dr. Crooks joined UAMS College of Pharmacy as Chairman and Professor of the Department of Pharmaceutical Sciences. He also holds the UAMS Simmons Endowed Chair in Cancer Research. Prior to Joining UAMS, Dr. Crooks held a joint faculty appointment at the University of Kentucky in the Graduate Center for Toxicology and the College of Pharmacy, as the George A. Digenis Professor in Drug Design and Discovery.

Dr. Crooks received his bachelor’s degree (Hons) First Class in Pharmacy (1966); Master of Science in Pharmacy (1967); Ph.D. in Pharmacy, and Doctor of Science all from the University of Manchester, U.K. He was a faculty member in the Department of Pharmacy, University of Manchester from 1968 to 1981. Dr. Crooks also spent two years as a research associate in the Department of Pharmacology, Sterling Hall of Medicine, Yale University (1976-1978).

Dr. Crooks is a past chairman of the Drug Design and Discovery Section of the American Association of Pharmaceutical Scientists, and served as a Member-at-large on the AAPS Executive committee from 2008-2011. He is the recipient of the 2010 AAPS Research Achievement Award in Drug Discovery and Development, and received an honorary DSc in 2011 from the University of Manchester for his work on CNS Drug Discovery.